He is versatile and intense in his desire to promote the cause of education & social welfare. His passion is visible through the multitude of tasks undertaken by him. He is B.A. (Hon’s), LLB, B.Ed, M.Ed, M.Phil, and PhD in History from Punjab University Chandigarh and possesses more than 28 years experience as a head of reputed residential Schools of India. The few of them includes; S.S.N Dagshai, Alpine School Pinjore, Malwa International Samana, St. Soldier Zirakpur and MKGM School Baroda, Gujarat. He has been also honoured with several awards which includes Avantika Rajiv Gandhi Education Excellency Award 2011, Bharat Shiksha Ratan Award by Global Society for Health Educational Growth, New Delhi in the year 2010, Shiksha Bharti Award by All India Business and Community Foundation (AIBCF) New Delhi 2010, Dr. S. Radhakrishnan Saman by Avantika New Delhi 2010, Indian Education Achievers Award 2011 by Indian Achievers Foundation, Rajiv Gandhi Education Excellence Award 2011 by Avantika New Delhi. He also represented Asia in world History conference in Madrid (Spain) in the month of January 2012 to read his research paper on Racism and Human Rights. The profundity of his prophetic vision inspires those under his influence to extend and strengthen the bonds of trust, dedication and commitment.

Popular posts from this blog 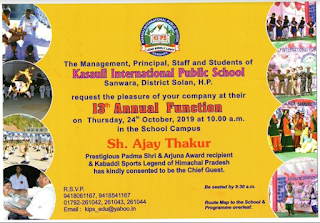 October 14, 2019
Welcome to Kasauli International Public School ‘A dream is not that which you see while sleeping; it is something that does not let you sleep.’

The philosophy of the school is based upon the Statement of Purpose, which provides the fountainhead from which our students’ dreams take flight, for it combines a strong belief in service with compassion and an underlying awareness of the greatness of our own culture. Not a dull moment here, this is Kasauli International Public School for you! From balancing the rifle on the shoulder to hitting the target in the archery area, we’ve mastered the art of juggling elephants.

While we celebrate the success of our CBSE students in their board examinations, our big number of students are accelerating in sports in National and International level. Technology is put to best use here with equipped library and distinguish laboratories at all levels, but, as the vision of the school states, we stay grounded in tradition. We…
Read more